Thanks to early diversification into non-oil related activities, as well as the protection of high foreign currency reserves, the UAE is well-placed to resist the impact of prolonged low oil prices.

Recent statements expressed by various UAE government ministers, as well as the informed opinions of oil industry experts, point to a generally positive position of the UAE relating to the current oil price slump.

A balanced approach
In a January 2016 interview with CNBC, UAE Energy Minister Suhail Mohamed Faraj Al Mazrouei said: “Collectively we can manage the transition to have the revenues from the oil industry as a luxury, or as an additional profit that’s going to be reinvested and not to have it as a major contributor in our budget.”

Also this January, UAE Minister of Economy and Foreign Trade Sultan bin Saeed Al-Mansouri said: “The UAE economy is strong and is based on the policy set by the Government where dependence on oil decreases year after year.” He observed that contributions to the country’s GDP are 31% from oil to 69% from non-oil sectors. In the 1970s the UAE’s revenues from oil was as high as 90%.

Lower gap to market prices
Last December the UK Guardian newspaper examined the oil price break point with major producers. The UAE is shown near the bottom of the scale with a $68 price set against the $37 barrel price – a far smaller gap than the Saudi Arabian price of $96. 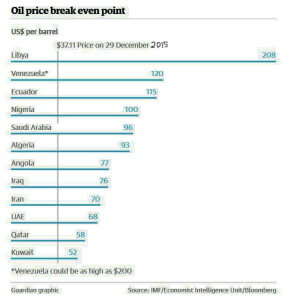 Mixed performance with property prices
According to REIDIN data, the oil slump is affecting parts of the UAE property market. Dubai property prices were down by 11% year-on-year in December 2015. Abu Dhabi residential prices fell by a more moderate 0.8% year-on-year over the same period.

The DTZ Dubai Commercial Real Estate agency says that while residential off-plan sales will be the most affected, the commercial and industrial sectors are likely to remain stable as market fundamentals are expected to remain good in the long term.

In broad terms, the UAE Government is managing a well-balanced economy where serious fluctuations in a given sector do not affect total performance and steady progress is being made towards achieving its ‘Vision 2021’ plans.